I've always enjoyed watching planes take off and land; and being around the military my entire life, I've had plenty of opportunities to do just that. Apparently when I was a little kid, I used to be able tell people what type of aircraft was flying overhead ... oddly enough, the picture above is of a plane that's been around long enough that I remember it from my childhood.

Now let me just be clear about the title of my post. Technically, just seeing aircraft flying over and taking pictures is not really "plane spotting". There are people who take this stuff way more seriously than that: Aircraft Spotting. In fact, when I was a teenager in England, there used to be a small parking lot just outside the end of the runway that was jokingly referred to as "spy corner". At the time, the SR-71 was stationed at RAF Mildenhall, and it wasn't really much of an exaggeration to believe that some of the people who sat out there every day seemed to know the flying schedule probably better than most of the active duty guys who worked on the base.

When the parking lot was full, that was probably a good indicator that it might be worth stopping to try to catch an SR-71 takeoff or landing.

I didn't have a camera back then. But now, if I ever find myself around the runway, and have my camera handy, of course I'm going to try to capture the moment. Only potential downside in this day and age, is that it's easier if I'm actually in uniform. For some odd reason if people see you taking pictures (especially with a long lens) around a military base they tend to get suspicious. Understandable, but a shame none-the-less.

Let's end this with one more shot that I took the other day here at Fort Huachuca, AZ 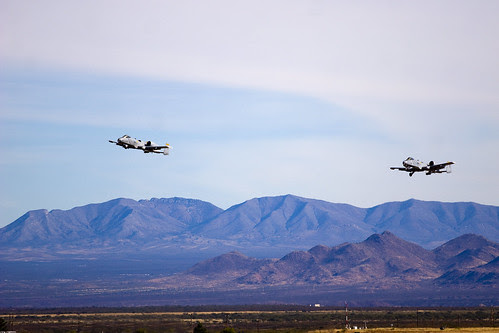 And a couple more from Iraq a few years ago: