Showing posts from September, 2010
Show all

We Had Two Birthdays Last Month 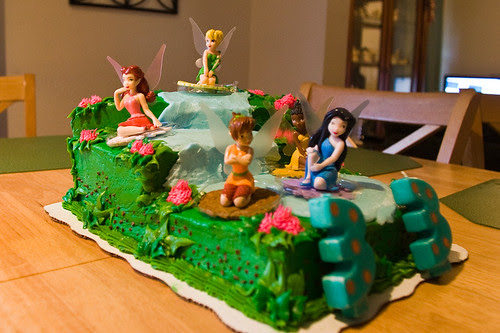 I've been a bit lazy about taking pictures lately ... and apparently I also tend to blog much less frequently without the benefit of pictures. So ... I'm going to bring back a modified "picture of the day". Here's the trick ... while I'll try to take more pictures, the ones I post here won't necessarily be new. If I have a day where I left my camera at home, I can simply dip into the 10,000+ images that are currently sitting on my little hard-drive. Today's pictures are actually from last month (see, told ya I've been lazy). We had two birthdays in August. I took pictures at both events. But for some reason, I just never got around to processing and posting them ... until now ;-) This first one is the cake that I got Ana for her birthday celebration. It's not polite to tell a woman's age, but I bet you can probably figure it out ;-) Ana has alway been a big Tinkerbell fan ... which as I've stated before is probably appropria
2 comments
Read more

Small Children and The Power of Laughter

Some people look at me like I'm crazy when they learn that at 41 years old, among my Seven kids is a 2 year old, and a 5 month old. It's not surprising. I've heard many parents openly express the thought that small children can drive you nuts. I'm not entirely unsympathetic to the idea. However for me, especially lately, my little ones tend to have the exact opposite effect. If anything, having young kids in the house is a bit therapeutic. Take yesterday, for instance ... a bit of background: We've got an inspection coming up at work, so the hours are getting longer. My brother's wedding is in a week, so we're getting ready to embark on a plane trip to Florida. And to top off an already stressful week or two, we had a couple of unexpected bills show up. So not unexpectedly, I arrived home at about 5pm in a bit of a grumpy mood. I was ranting and raving about some silly thing ... and Ana (proving yet again why I love her) was not ranting back, but simpl
2 comments
Read more

September 05, 2010
Do you Need a computer to make money from home? This is a question I've been doing quite a bit of thinking about lately. Now, obviously I'm sitting here right now at my computer, typing out a post about home business; so my answer has to a best be a qualified "maybe". That being said, I've had a part-time business for well over a decade. And I really do wonder, would I actually have a bigger bank account right now if I had spend Less Time on the computer over the years? Primarily because the business model that I chose back in 1999 is Network Marketing, I really do think that the honest answer is Yes. You see, I'm in the "people business". And while it's definitely been profitable to learn how to use the right key words to drive traffic to websites; enabling me to meet people from all over the country, and the world ... when you get right down to it, sitting in front of this silly little screen for hours a day, is just not the most effective w
7 comments
Read more
More posts