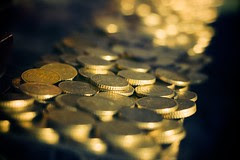 Let me start off by saying that I am not an expert on poker bankroll management. There are plenty of good resources out there, for determining exactly how much money you should have available for whatever type/level of game you intend to play. Instead, I'm going to share a few personal mistakes from a "normal" guy who plays relatively low stakes online poker.

I strongly suspect that I am not alone in making a few of these errors. So without further ado, let's get to it ...

First, a couple of "no brainers".


Ok, so that's the basics out of the way. Now, on to the mistake that usually kicks my butt ...

Unless you are trying to learn a new game (which will generally cost you some money), once you find a game or format that is profitable for you, STICK TO IT.

For instance, I'm a relatively good tournament player. If all I did online was play sit n go tournaments, and an occasional bigger multi-table tournament on the weekends, my poker bankroll would definitely grow over time. Tournaments are +EV for me.

Unfortunately, I don't always have time to play in tournaments, but I still want to play poker. So, I'll take some of my money and go play in a cash game. Only one problem ... I'm NOT a good no limit hold 'em cash game player. I don't know if I get bored, or what, but when it comes to cash games, I just tend to make way more bad decisions than I do in tournaments. Since I've been playing poker, cash games have definitely been an overall drain on my bankroll.

One exception to that, is limit Omaha 8 or better. That's a game that I can come ahead on almost every session (especially at the lower limits I usually play at). But even there, if I can't get a seat at a limit table, I'll occasionally sit down at a pot-limit, or even no-limit O8 table. It's pretty much the same game, but much more volatile, with bigger swings. They're the kind of games where one bad decision, or even a bit of bad luck, can turn a profitable session into a losing session in a hurry.

The thing is, I know that I shouldn't play in these games, which over time have proven to be unprofitable, but for some reason I still do. Right now, I guess I can just use the excuse that I only play poker for entertainment (which has the benefit of being the truth). But, if I ever do intend to use the game itself to significantly supplement my income, I'm going to have to get a lot more disciplined about sticking to games and formats that I actually have a reasonable expectation of being able to beat over the long haul.

What about you ... do you have any tips or stories about managing your poker money?