Justin and I Search For Mountain Lion on Fort Hood 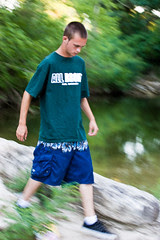 Yesterday Evening my son Justin and I took a little trip down to the creek behind our house. I took my camera with me so that he could show me some of the wildlife that he seems to encounter every day on his trips back and forth to the skateboard park.

So far he's seen everything from deer, to water moccasin snakes, to tarantula spiders; and then the other day, he came home and told me that he saw a mountain lion.

In hindsight, this might not have been the most responsible reaction a parent can have when their teenage son says he's seen a mountain lion, but after first expressing my doubts, my second thought was "hey let's go see if we can find the mountain lion and takes it's picture".

So off we went at about 7:15pm yesterday evening. My son and I walking down the path into the woods, in search of mountain lions ... or at the very least a "consolation prize" of cool poisonous snakes.

As you can probably guess, since the picture above is of my son, and not a wild animal, we found neither one; which might actually be a good thing. Plus, along the way, I think we might have solved the mystery of the mountain lion ...

After doing a little research, we discovered that there very likely are mountain lions on Fort Hood. However, I expect that they're most likely hanging out up in the training areas to the North, where they are less likely to encounter people.

Justin actually thought he saw a "baby" mountain lion. As we were walking through the woods yesterday, I think we eventually came to agree that what he saw was much more likely a Bob Cat than a baby mountain lion.

Never-the-less, it is pretty cool to be able to walk almost literally out the back door right here on Fort Hood post housing, and be able to treck into the woods in search of "exotic" wildlife.

Something tells me this won't be the last time my son and I go looking for mountain lions.

... but if by some chance we ever find one, I sure hope I have the long lens on my camera that day ;-)