How to keep a Toddler Quiet for Hours 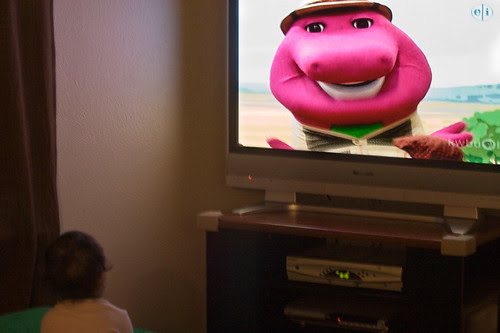 For some reason, my wife is not a huge fan of the big purple guy. As for me, I'm not at all ashamed to admit that I love Barney! ... especially as the parent of a toddler.

To say that Jaiden is a "active" little girl, at just under 2 years of age, is a bit of an understatement. Lately it seems like it's gotten to the point where she gets into pretty much everything. So, as you can probably imagine, "watching" her can be pretty much a full time job. And since I've been known to enjoy my "goofing off" time, if I can find a way to keep her quiet, occupied, and out of trouble, I'm all for it.

It comes on PBS every day at 12:30, and you'd better believe we record it on the DVR.

Later in the evening, usually while Ana or I is cooking dinner, Jaiden will sit for 30-90 minutes watching (and interacting with) Barney on the TV. She sings along with the songs, dances, and even talks to the characters.

And the really cool thing about kids this age is that they don't really care too much whether or not the show is "new". Jaiden will happily watch the same episode over and over again. Along those same lines though, she also loves to watch Nick Jr ... Dora, Wubbzy and Kailan are her favorites.

Sometimes I feel like a bit of a "bad parent" for letting the tv be an occasional "baby sitter" .. but then, I think as long as you choose the shows wisely, it's not such a bad thing in moderation.