Do You Like Live Poker or Online Poker Better? 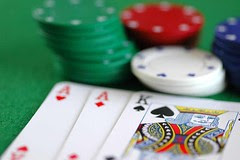 I play most of my poker these days online, but I have had stretches, mainly the two times I've been deployed to Iraq, where I also played quite a bit or live poker. I'm honestly a little bit conflicted about which I like better.

The biggest plus for online poker is the convenience factor. This is especially relevant to those of us with young kids. For instance, as I type this, I'm currently playing a tournament on Poker Stars while my 6 week old baby daughter sleeps in her little chair next to me. This a big plus, as my wife is way less likely to complain (as much) about my poker playing, if I'm able to watch the baby at the same time. :-)

I also really like the fact that I can jump online and practice, or even try totally new games for a relatively small investment of time and money. Take my current two favorite games, Omaha 8 or better and RAZZ. If the only poker I ever played was home games, and the occasional trip to a casino, I'd almost guarantee that I would have stuck strictly to Texas Hold 'em like a very large percentage of other poker players; especially here in the United States. But thanks to online poker sites, I can now hold my own pretty well in a variety game like HORSE

All that being said, there's nothing much more fun than getting together with a group of friends a couple of times a week to play some real, live, tournament poker. As I said, during the two times I was deployed to Iraq, we played a lot of poker. Mainly cash games, but for 5-6 hours a night the first time I was over there in 2007. And then just last year, the base actually had tournaments set up 3 or 4 nights a week. Either way, I made a lot of new friends, and won a few bucks along the way.

I'm still not very good at "reading" my opponents in live games. But sometimes it's not really that big a deal. I've played so much poker online, that it's actually still possible to put people on a range of hands, even in a live game, based purely on betting patterns.

So basically, I guess my conclusion is that I think I enjoy live games more, but I don't think I'd do nearly as well playing live poker, if I didn't have the experience of online poker to help me along the way.

How about you ... what are your experiences with live vs. online poker?