Why Do Kids Make Friends So Easily? 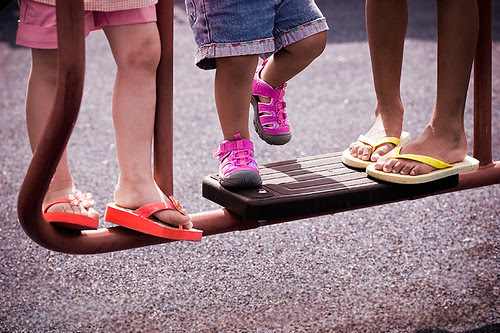 We went to the big playground last weekend, and I swear weren't there 5 minutes, before the girls had two new friends. They played together for over an hour; laughing, giggling and holding hands as they went from slide to slide and bridge to bridge. When it was time to go home, they hugged and said goodbye.

This isn't the first time I've seen something like this with my kids. I remember way back when we first moved to Tyndall AFB Florida in the mid 90s. Justin was about 5 years old when we moved into base housing. The day the movers came, and we got to the house, he immediately started walking up and down the street, knocking on doors. Whenever someone would answer, he'd say "I'm Justin, I'm new here, do you have any kids that might want to play with me?" Simple and effective. Justin always had plenty of friends.

Contrast this with most adults ...

Even just at the playground, while the girls were skipping around with their newfound friends, I was sitting at a little round table at the center of the park reading the paper. Several parents came into the playground with their kids, started to approach the table, and then turned around when they saw me there. One guy, I even offered "hey there's plenty of room here, I don't mind", still insisted on sitting over on one of the little bridges.

I'm not very scary looking, and I don't think I smelled too bad that day. And while it still might be tempting to be a little self conscious, I suspect the problem was probably not just me. It seems that we adults can sometimes be a little reluctant to interact with people we don't already know.

What happens to us, between the time that we're 5 or 6 years old, when making new friends was a pleasurable experience; and adulthood where we become suspicious if someone we don't know, so much as looks in our direction for too long?

Was high school that traumatic?

Or maybe the world is just a scarier place the longer you live, and the more you know?

Unfortunately, I don't really have a good answer to this question ...

But I just can't shake the thought that maybe the world would be a much better place if more of us acted like 6 year olds every once in a while ;-)