Setting Up Our Backyard Pool 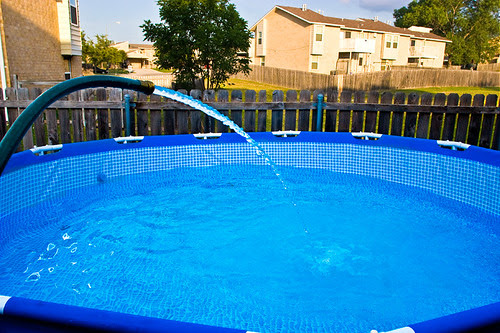 Last summer, when I was at training in Florida, Ana bought one of those little above ground pools for the kids. It's nothing fancy, I can set it up and take it down by myself, but it's not a quick process, as the thing holds a couple thousand gallons of water.

In the fall, before I left for Iraq, I drained the pool, took it apart, and packed it up for the winter. I expected to reassemble it when I got back this spring. However, I have an impatient wife. So for some reason, she (while 7 months pregnant) decided to set the silly thing at about the end of March (I was still gone). She didn't put any water in it, but it sat there for a month and a half, so it did accumulate some rain water ... enough that a bit of algae had started to grow.

Yesterday was the day that I decided to set up the pool properly for the upcoming summer ...

The first step was taking it apart, so that I could get that pesky rain water out. There was just enough nasty, green water, that this task was not nearly as easy as it may sound; but it worked out eventually. Next I had to scrub off the algae ... which surprisingly, Was much easier than I expected ... a little brushing, and a squirt of clean water from the hose, and it came right off.

Quick reassembly (with as little cussing as I could manage), and positioning of the pool on the least steep section of our absolutely Not flat backyard, and it was ready for water ... wait, it would be ready for the water after I found Ana to help me figure out which one of those silly tubes goes in which hole of the pool and pump.

The picture at the top of this post is about 3 hours later. Apparently a couple thousand gallons of water takes a little while to make it's way out of the faucet, through the hose, and into the pool. Just before dark, I turned off the hose, turned on the pump, and put the cover on the pool. I figured the chemicals could wait until the morning.

Well, morning is here, and pool chemicals is what I'm doing. I added some stuff called Ph minus, then I have to go test the water. After that, it's the shock treatment, followed by more testing. The the algae guard, and yep, test again. At some point, I know I have to put chlorine in there (I have a whole list of directions), and there's even some stuff called clarifier, which sounds important. I'll figure it all out. But really, this seems like it's a bit more complicated than it has to be, for a pool that we bought for $100 on Craig's List.

Back in the 90's, when I was stationed at Opp / Andalusia Alabama, my redneck neighbor Butch had a totally different approach to maintaining a similar type of pool ...

We're standing there on his porch one day, while his kids, and mine, are swimming in his little backyard pool. They seem to be having fun, and I remark to Butch that getting a pool was a good idea. He mumbles yea (he talked like Boomhauer from King of the Hill), and points out that he's not the only one in the neighborhood with a pool (he literally points) across the way at another pool a few houses down. And that's where it got funny ...

He tells me (with a straight face, and no irony at all) "them neighbors make it way harder than it has to be"

To which Butch replied: "They use all sorts of them fancy chemicals and stuff ... don't really need em"

Me (curiously): "Well what do you do to keep your pool clean?"

Butch: "About once a week, I just dump a gallon of bleach in that sucker ... same difference"

I wanted to laugh, but not really, as I could, at that very moment see my two young kids splashing around in Butch's pool. Talk about your unintentional bad parenting moments.

Ok, well let's wrap this up, I have to go back out in the yard and test my "fancy" pool chemicals.