Searching For An Inexpensive Used Car - Strike One 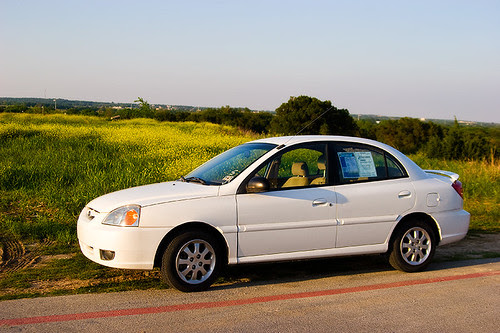 I almost bought this little Kia Rio. It's exactly the sort of car that I'm looking for. Inexpensive, and gets good gas mileage. I just need something to get me back and forth to work. I found it online, and went out to look at it yesterday. As the dealer was showing it to me, he noticed that it needed new tires. They replaced the tires today, and told me that I could come test drive it this afternoon ...

I got caught up in a meeting, so I didn't make it out to the dealership until about 15 minutes before they were due to close. Even so, a salesman was expecting me, and had the key to the Kia in his hand as I walked through the door. He told me to take it out for as long as I needed. Ana and the girls were with me, and we had to be to gymnastics in about 40 minutes, so I just too the car for a test drive down the street about 2 or 3 miles and back. The car ran really well, shifted fine, the radio and the air conditioner worked. I really wanted to like this car, so I was pretty happy.

When I got back, I told the salesman that I would call the manager in the morning to maybe talk a little more about the price (I'd already talked them down about $700, but wanted to try to knock a bit more off). As I was getting ready to go get back in the van, he asked me if I just wanted to keep the car overnight, so I could drive it for a little longer than 10 minutes. Sounded like a good plan to me.

... and it turned out to be a very lucky break.

I was following behind Ana as we got out on hwy 190, where the speed limit is 70mph. I shifted through the grears, and was humming along at about 2800 rpm in 5th gear, doing 65mph down the highway. I was already thinking more about the price negotiations tomorrow. Then all of a sudden, the car just lost power. The rpms dropped to under 1K, and when I pressed on the gas pedal, nothing happened ... the car just slowed down, rather quickly. I'm actually kind of lucky I didn't get rear ended. Eventually, after I slowed to about 20mph, and shifted down into second gear, giving it some gas finally started working again.

At this point, I'd pretty much decided I probably wouldn't be buying this car.

The about 5 minutes later, the exact same thing happened again, and I knew that I definitely wouldn't be buying this car. It's in the driveway right now, but I'll bring it back tomorrow right after lunch.

Oh well, strike one. But, at least I found out before I signed any purchase agreement.

In a way, I almost wish I didn't even have to go car shopping. I had a perfectly good 4 year old Saturn Ion before I went to Iraq. But, with a growing family, we decided to trade my Saturn, and Ana's SUV for a Kia Sedona mini-van right before I left last fall.

I figured I could just use the extra money (about 3K) that I'd earn on the deployment to pay cash for a little "beater" type car when I got back. Unfortunately, I forgot to account for a couple of things ...

Apparently it's quite a popular practice to take inexpensive vehicles, and instead of selling them to a dealer, donating a car to a charitable organization.

And even more significantly ...

Fortunately, I have a couple more weeks before I actually "need" a car. But man, I sure do wish that this Kia Rio would have worked out better, so that I could already Have My car.