April 14, 2010
I'm sitting here at 2:30 am, in a hotel in Baltimore Maryland. I catch my final flight home to Texas tomorrow morning. I've been taking my pictures of the day this week, but my access to this blog was blocked while I was in Al Udeid Qatar (not sure why). So, I thought I'd take a few minutes to catch up again, with pictures from the past 3 days, during my trip home. This picture was already posted on Facebook the other day, but I wanted to put it up here for people who only follow the blog. This shot was taken from inside the C-130, as they were loading the cargo pallet and getting ready for take-off. I like the looks on some of the guy's faces ... the dude nearest to me looks particularly happy to be going home. 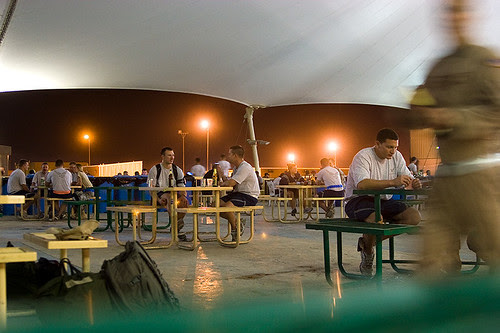 My next stop was Al Udeid AB in Qatar, where I spent about a day and a half. Just about every Air Force person who is going into or out of Iraq transits through Al Udeid. We fly back and forth on contracted commercial airliners. While we're there at the base, the majority of short-term visitors stay in big tents with about 25-30 bunk beds. It's not too bad, there's a couple of BXs (military department store), a 24 hour dining hall, a pool, a rec center, and the "world famous" beer tent (pictured above). While we're at Al Udeid, every Airman is authorized 3 beers a day. Many people take full advantage of their quota. Me personally, I had one beer while I was there ... guess I just wasn't thirsty. 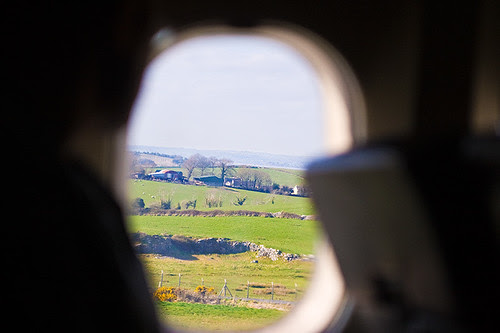 Finally, our one and only stop on the flight home today was about a 2 hour layover in Shannon Ireland. The airport itself was relatively unremarkable. There were phones, free wifi, a nice duty free gift store, and of course a bar. That bar, btw, made some pretty good money today. There were about 200 people on our flight, and the great majority of them ordered 2 beers at about 6 Euros each ... again, I took a pass ... although Lt. Puckett is probably gonna give me crap for not following his advice to try the Irish Guiness. I just must not be much of a drinker any more. I did take a few pictures of the bar area, but in the end, I liked the image above, taken out the plane's window as we were landing, much better.