Benefits Of Being An Older Parent – I Now Love Swings 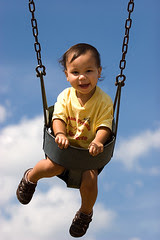 In some ways it's a little scary to say that I'm 41 years old and have a daughter who's only 19 months old, with another one on the way in just a couple of weeks. Maybe I'm already too old to be a "new" dad again. But on the other hand, there are things about being a parent now, in my 40s, that just seem so much easier/different than when I first experienced fatherhood as a 20 something guy.

Today was a perfect example. I took Jaiden to the park behind our house, where we played for over an hour. She went on the little bouncy frog thing, tried to climb up the monkey bars, and slid down the slide more times than I can count. And when we weren't doing that, we spent a long time, laughing as I pushed her on the swing (picture above).

And that's the biggest difference between "then" and "now".

There was a time when I used to "joke" (but it wasn't really a joke), that the perfect park was one with no swings. You see, a trip to the park was basically a chance for me to bring a book, or my phone, or the newspaper, etc., and just "kick back" for an hour or two while the kids kept themselves occupied with all that cool playground stuff.

But then, inevitably, a swing set could easily "ruin" my best laid plans ...

The combination of kids and swings mean dads or moms who need to get up and push. It's kind of hard to read and push a swing at the same time.

Today, I pushed, and laughed .. pushed some more, and Jaiden and I both laughed together.

It was WAY better than reading a book.

Maybe being a 41 year old dad isn't so bad afterall.