A Spring Evening In Central Texas 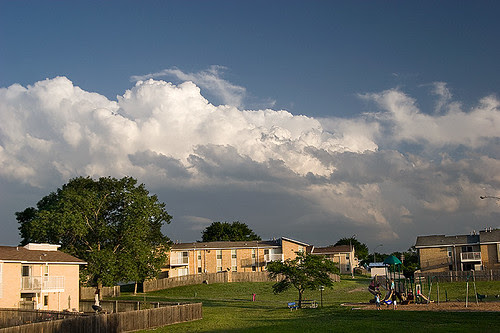 I'm back in Texas, and it's spring time, so that means I expect to get some pretty decent thunderstorm pictures over the next month or two. Unfortunately, today wasn't one of those opportunities. Ok, maybe unfortunately isn't quite the right word. Severe weather is only "cool" when I'm taking pictures of it. If people get hurt, or their property gets damaged, it's very much not a good thing.

During the daylight hours yesterday, most of the more intense thunderstorms stayed pretty well off to our east; although, we were in the tornado watch box from about 6pm until after midnight. The picture above is of the park out behind my house just before the sun was going down. You can see some storms off in the distance, but for the most part the atmosphere over us was still somewhat "capped".

We did actually get a pretty intense line of thunderstorms move over us from the west latter on, right before I went to bed. The lightning show was pretty good, but my tripod was still in a closet, buried behind a bunch of other stuff, so I couldn't be bothered to dig it out. Next time I'll be a little better prepared.