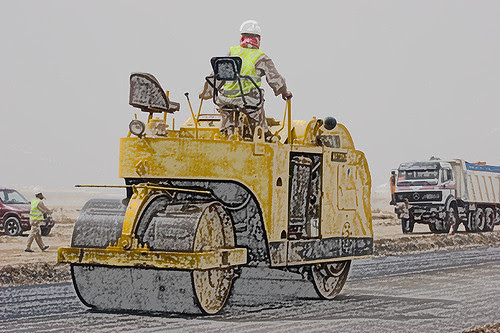 I was going to say bulldozer, but I don't think that's actually a bulldozer, so for the sake of this post, let's just call it a road flattener thingamy bobber.

Okay, so these road flatteners (and bulldozers too) are pretty much all over this post. There is a ton of construction going on. In a way, it's nice to see that they're fixing the roads. For the past 5 months, let's just say that it's a good thing our truck has 4-wheel drive. In the mean time though, the detour is even more bumpy than the old road. One of my guys was actually going a little too fast the other day, and actually caught some air due to one rather large bump.

I wanted to include at least one picture of the construction in my project365 ... this one is as good as any ... and I made it kind of cool and "cartoony" to boot ... so it's not just a picture of some construction dudes and their equipment.

So, back to this blog post's title. I'm done writing, it's gonna have to be a short article today. I've been a little under the weather for the past 24 hours now. Actually, that might be understating it a bit. Walking home from dinner tonight, I kind of felt as though I'd been run over by one of those road flattener thingamy bobbers up there.

Happy Friday to you.