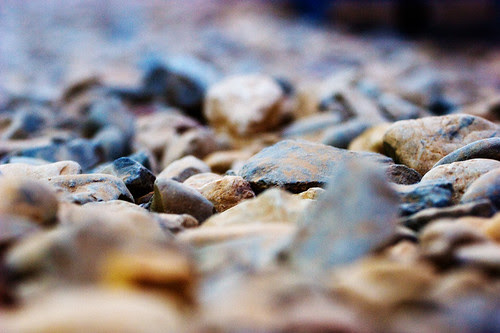 I've had ankle problems for a while now, and today my right ankle is swollen, and I'm limping around again. I don't know exactly what I did to it this time. But, since I needed to take a picture anyway, I'm going to go out on a limb, and blame the rocks!

We have rock paths everywhere. I think they do this at every military base here in Iraq, because we had the same river rock paths when I was up north in 2007. In a way, these little paths are nice. When it rains here, everything turns to mud. If it wasn't for the rocks, we be mucking right through that muddy mess. But, unfortunately, I guess paths require BIG rocks to work properly. And I'll tell you what, it is so, so, easy to be walking along all fat, dumb and happy one minute, then be rolling on the ground in pain the next because you stepped off the side of one of the silly stones in not quite the right way.

I'm not the only one with an ankle injury. Kevin, my swing shift forecaster is an avid runner (seriously like 9-12 miles every night); but he's been having to take it easy now for a little over a month. One day he was walking to the truck, caught the edge of a rock, felt a little twinge in his knee, but thought nothing of it and kept going. Ever since then though, he's been in pretty much constant pain. The docs are calling it a "high ankle sprain" ... which apparently isn't terribly easy to treat. He seems to be doing a little better here recently, but it sucks that he can't run as much as he wants to.

As for me, I think I'll just hold off on the doc visit until I get home next month. Until then, I guess I'll just walk carefully, and look forward smooth sidewalks and soft grass in the near future. ;-)