Joining The Air Force Was A Good Decision 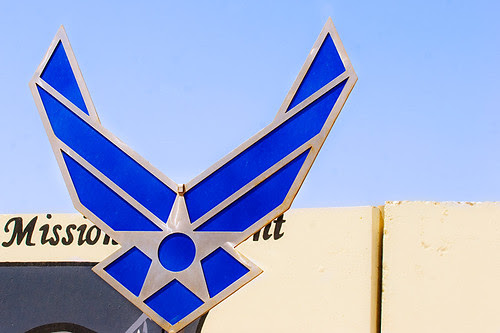 Given this history, I suppose it probably wasn't too much of a long shot that I ended up joining the military ... although if you had asked me when I was 18 or 19 years old, had long hair, and was working as a bartender at the RAF Mildenhall Galaxy Club, I would have told you something along the lines of "no frickin way will I EVER join the military!"

Needless to say, I did end up joining just a few years later.

Looking back, all things considered, I think it was actually quite a wise decision ... even though, at the time, it was something of an impulsive action.

Here's the story of how I joined the Air Force ...

My dad retired from the Air Force in 1989 when his tour at RAF Mildenhall England came to an end. We packed up all of our stuff, and moved to Florida. We lived with our Uncle for a couple of weeks, until mom and dad found a house about 40 miles north of St. Pete, in New Port Richie. My "room" was the garage (my choice).

My first job in Florida, was working at a telemarketing place, trying to talk people into accepting "free" vacations, that would also include the "bonus" of high pressure time-share sales seminars. I wasn't very good at it, and as a result, the pay ended up being pretty bad too ... which was doubly tough, as I was used to having literally hundreds of dollars in my pocket at any time, when I was bartending in England.

Then I got what sounded like it was going to be my "dream job" ...

I was hired as grounds keeper at the Innisbrook golf resort. One of the benefits of the job, was that I could play Free golf at a course that hosts professional events ... heaven!

The job started at like 5am ... and I'm NOT a morning person. It also turned out to be much harder (in some ways), and more boring (in other ways) than I had expected. For instance, a typical day for me, as a new guy, might involve being given a fork, assigned a green, and instructed to remove all the of the crab grass shoots ... roots and all.

Oh yea, did I mention that we had to wear a "uniform"? It was a white button up shirt, with the Innisbrook logo, and a construction site type hard hat (to protect against errant golf balls). It was hot after the sun came up, and the hard hat and extra shirt just contributed to it.

After I'd worked there for a couple of months (and I think had only played free golf once), it wasn't so bad, but I was having a hard time imagining myself working there for the rest of my life. Then one day, things kind of accidentally came into focus ...

The head grounds keeper usually drove around in a golf cart. This particular morning, he drove up to where I was standing, and told me he needed me to spray herbicide along the edged of the 13th and 14th fairways. There was about a 50 lb canister of herbicide, with a spray nozzle on the end, sitting in the back of the golf cart. I thought to myself "sweet, I'll be riding the golf cart today"

He said he needed the golf cart, simply off loaded the heavy canister and drove away. To my credit, I did make it a couple hundred yards down that fairway, spray weeds the entire way. But I finally just stopped, looked around, and said "what the heck am I doing here?"

Right there and then, I took off my hard hat and shirt, folded it neatly, and placed it on top of the herbicide canister.

I then walked the short distance to U.S highway 19, stuck out my thumb, and hitchhiked .... Straight to the recruiters office!

I took the ASVAB test a couple of days later (scored 99% AFQT btw), and was eventually given a basic training date of 28 December 1989.

As some point during this process, I went down to the St. Petersburg MEPS office to choose my job.

I didn't know exactly what I wanted to do (side note: I'm now 41 years old, and still don't know what I want to be when I "grow up")

... but, I did know enough about the Air Force to realize there were some fields I definitely didn't want to go into. I needed to make sure I got a guaranteed job.

Fortunately, with my high ASVAB score, it wasn't too hard of a "demand" to get met. Here's how the process worked ...

They actually gave me a list of all the available career fields for the time frame that I would be graduating from basic training, and ready for Tech School. They told me to look through the list, and choose 5 jobs.

I honestly don't even remember what the other 4 choices were ... I just know that about 2 hours later, they came back and told me that I was going to be a Weather Man.

The intervening 20 years, seems to have flown by.

But I have a ton of good memories and experiences from my time in the Air Force. And really, considering I'm here primarily because of a very rash, spur of the moment decision, I can't complain at all about the way things have turned out.

And you know what's really funny?

My 17 year old son, when asked if he might go in the Air Force someday, quickly responds ...

"no frickin way will I EVER join the military!"