Dilbert Blog A New Favorite In My Google Reader 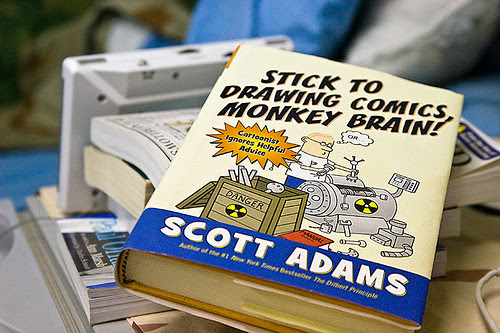 One thing we don't really have a lack of over here is reading material. We can go to the library, the rec center, or we even have a couple of shelves full of books at work. People send over boxes of books. I've read a whole bunch since I've been here (choosing not to have a tv in my room contributed).

Anyhow, about 4 or 5 days ago, I picked up the book pictured above. It's by a guy named Scott Adams, who draws the Dilbert comic strip. Obviously I've seen (and laughed at) some Dilbert cartoons over the years, but I've probably never been someone who could be classified as a "raving fan". After getting about halfway through this book, that might just change ...

This isn't a book of comic strips. It's actually a collections of mostly blog posts from a couple of years ago. The thing is, reading through the stories, it's quickly obvious that this guy is truly twisted (in a great way) ... I'm loving it.

And even better, there's still a blog, and it's pretty active, with new posts at least every couple of days: http://dilbert.com/blog

Of course I added the feed to my Google Reader, and have been catching the new posts as they come in. I also plan to start reading the comic itself as often as I can ... it's in the Stars & Stripes paper.

If you are on a computer (such as, at work) where websites are regularly blocked (the Dilbert.com site was not accessible), an easy work around, is to just add the feed to your Google Reader (which often isn't blocked). You can't see pictures and things like that, but it's better than not being able to read it at all.

Alright then ... I'm gonna go call my mom (it's her Birthday) ... and then read a couple more stories in Scott Adam's book before it's off to sleepy land.

Catch up with you again tomorrow.