C-17 GlobeMaster Taking Off Into The Rising Sun 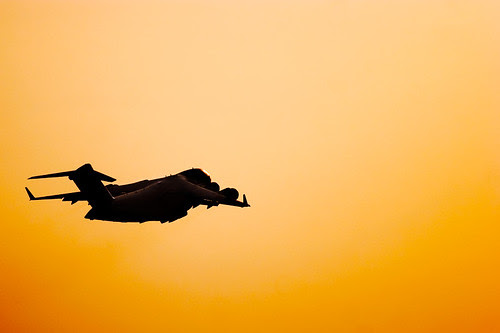 I like airplane pictures, and I like sun rises. Every once in a while I'm in the right place, at the right time, with the right lens on my camera .. as I was this morning when this C-17 was taking off into a nice orange early morning sky.

When I first started project365, I wasn't really planning to take many pictures of the aircraft around the base. However, over the past 2 1/2 months, two of the most popular shots (here on the blog, and flickr) were of a C-130 airplane and UH-60 helicopter. Of course, I did have a cool story to go with each of those posts ...

I've flown on C-17s a couple of times over the years. I remember on the flight into Iraq in 2007, the last time I deployed here, we were really happy to be on a C-17 instead of a C-130 ... I wasn't quite so lucky this time. I was also on a C-17 flying Space-A from Hawaii to Travis AFB to go meet up with my son Justin a couple of summers ago. The coolest thing about flying Space-A on a C-17 is that if you bring a sleeping bag, once its up at cruising altitude, most of the time the crew will let you stretch out right there on the floor of the aircraft. In some ways, it's almost better than flying commercial. The other thing is, these planes are new enough that they're fairly reliable ... unlike my trips on C-5s ... if you get a seat on one of those, don't get too excited until you're at least half way to your destination. (so that when some sort of warning light inevitably comes on, it's easier to keep going, than to turn back) :-)

Hopefully I'll be on one of these bad boys again in just a couple of weeks ... on my way home!

All this week, I'm attending a computer class at Hickam AFB. Seeing as how I live in Iroquois Point, all the way at the end of Ewa Beach, this presents me with the possibility of getting stuck in traffic jams and "enjoying" the comfort of my car for at least an hour each way.

Fortunately, courtesy of my military ID card, I have another option ...

Because this used to be military housing, the Navy still runs a shuttle boat between the dock on our side of Pearl Harbor, and several stops over on the Navy base. Since the Navy base is connected to Hickam, I just left my car on that side and have been enjoying nice 20 minute boat rides for the past two days ... and avoiding the traffic.

The boat leaves the dock at Iroquois point several times between 5am and 6:30am in the morning. And runs back the other ways every hour between 2:30 and 6:30pm. Anybody with a military ID card can ride the Grey Boat, but active duty Navy and Navy DOD civilian employees have priority. If you&#…
Read more

** Note: the following information covers the period of my deployment to Ali Base from Oct 09 - Apr 10. I am now back in Texas. If you know of anybody who is currently at COB Adder/Ali Base, who is blogging about it, please let me know via the contact form, so that I can link to them from this post ... thanks.


I was tasked to put together a welcome letter for some of the new guys who will be replacing us over the next few months. As part of the project, I took a picture of the wall mural above; which is one of the first things you see when you get off the plane here. As I was taking the picture, I remembered back to when I first found out I was coming here. As soon as I got home from work that day, I fired up the old macbook, and did a search for Ali Air Base, COB Adder, and Tallil (yes, this place goes by all of those names). I found a few websites and blogs, but of course I wanted to know more (especially about quality of life stuff).

So, here's what we're gonna do wit…
Read more

Well seeing as how it's January 1st of a new year and I'm actually thinking about it, I am going to attempt to do the entire 366 pictures of the day.
When possible, I'll write a (related) story to go with it. However sometimes I expect it will be enough just to get a picture posted.
Today's picture is me doing planks.
One of the Facebook groups that I'm in started a January challenge to do 10 burpees and 10 sit-ups every day for the rest of the month. I chose to substitute three sets of 60 second planks for the sit-ups. I also did the burpees this morning, and even had my daughter Joey join in. It was fun.
I'm not one to do fitness type New Year's resolutions. But I did make some pretty good healthy lifestyle habit adjustments last year (although I didn't start until the end of January). I lost a little over 50 lb mainly through improved eating habits (I expect all right more about this in the coming year). But I did also go to the gym twice a week. This ye…
Read more