UH-60 BlackHawk - It's All About Where You Sit 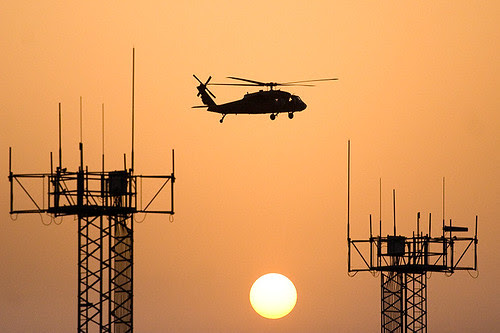 I really didn't intend to take a lot of pictures of aircraft for project365. But it seems like every time I have the 70-200F4L lens on my camera, an airplane or helicopter flies by, and the scene is just a bit too interesting to pass up. In this case, it was a UH-60 Blackhawk flying low over the setting sun, right between a couple of radio towers.

And even better, after I took the picture, I realized I even have a story about a blackhawk helicopter ride. I don't think it's quite as interesting as my C-130 Hercules story, but there is a useful tip or two in it.

It was just a couple of months ago, on my way back down here from Baghdad, that I got to ride on a UH-60 ...

The first lesson learned: If you brought goggles with you to Iraq, it would be a very good idea to wear them if you're riding on a Blackhawk.

Second lesson: If you have any choice in the matter, do not under any circumstances sit in the seat nearest the door, facing forward. Imagine you're in a convertible cruising down the highway at about 150mph ... with no windshield. That's kind of how it feels.

Third lesson: Hope for a short flight, or at least that the other passengers won't have a lot of bags. On my flight, we were packed in like sardines; and since a few dudes had ALL of their luggage with them, we had duffel bags and backpacks piled about 3 deep, resting on our legs for the entire 3 hour flight. It hurt to walk by the time I got back down here.

Now don't get me wrong, my experience of being a normal passenger on the helicopter might not have been the greatest. But a couple of our guys did also get to go up on more of an "incentive" type flight, where they were much more comfortable. And I will definitely say that if you gotta get from place to place in a war zone, even an uncomfortable helicopter ride is always better than actually driving on the off-post roads!