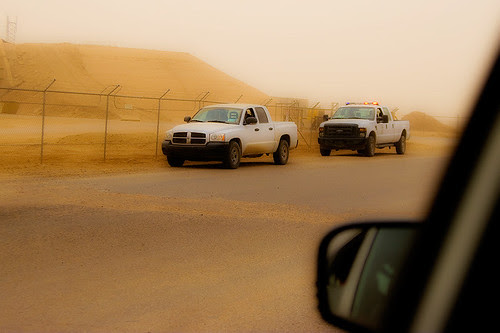 Would you believe that even here on our little deployed base, we've got traffic cops? Seriously. I've never been pulled over for speeding, like these unfortunate gentlemen. However, I did have the "pleasure" of dealing with one of these young Airmen a couple of months ago, when I first got here.

I was driving one of my guys back to his room after his shift was over. About half way there, he realized that he'd forgotten something he needed, so I did a "Ueeee" and turned around. About a 1/4 mile or so later, I noticed the flashing lights in my rear-view mirror. I wasn't speeding or anything, so I figured the cop was going around me ... I realized I was wrong, when he pulled up right behind my truck.

So he walks up to the truck and asks "Do you know why I pulled you over?"

Him: "There was a stop sign back there. You didn't come to a full and complete stop."

I swear, it took every ounce of restraint I had not to blurt out "You've got to be shitting me !!!!"

Not only was he not kidding, but he gave me a ticket.

.... later that day, back at the office, I administered a stern counseling to myself (I am the NCOIC after all) , then I taped the ticket up on the wall so the guys could laugh at me for the next week or two.

Don't get me wrong, I think that obeying traffic laws is important. But come on, we're here in Iraq, and these armed, well trained, Security Forces Airman don't have anything better to do than hide near stops signs, to make sure that the driver of every single vehicle stops and counts to 3 mississippi before proceeding through a wide open intersection ???