The Fog Of War 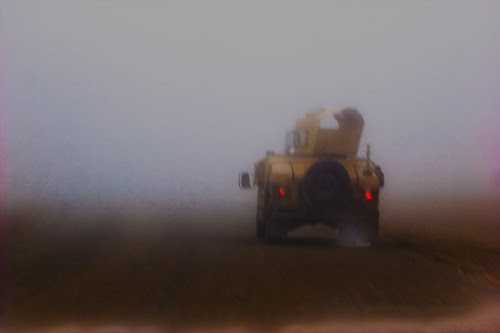 Hey, as long as I'm stuck here in Iraq, I might as well take a few "military themed" pictures for my project 365 picture of the day. I'm calling this one "The Fog of War".

This is definitely a subject where I could probably quite easily write a 1000 word post. However, this blog is very rarely political. So, suffice it to say, my thought on war is that it's very rarely a "black and white" type proposition. There's an awful lot of nuance in that "gray fog".

Actually, on a bit of a "less heavy" subject ... do you like this picture? If so, this is a good example of an image that at the time I took it, was never intended to be seen. It was going to be a "throw away". But then, after playing with it for a while in Photoshop, I really started to like the "feel" of it. And here it is, part of my Picture a day project.

A very big part of what makes a "good" picture takes place both BEFORE and well AFTER the shutter is snapped. Having a good imagination (for seeing the shot ... then post-processing in the "digital darkroom"), is probably more important than having a "nice" and/or "expensive" camera.