Somewhere Over The Iraqi Rainbow 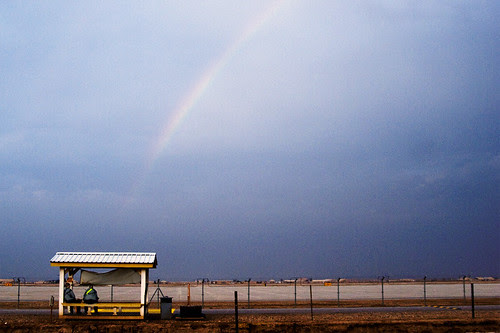 Ok, so if I sit at that bus stop and tap my ruddy tan boots together 3 times, will I suddenly find myself whisked back to Texas?

If you've been following my posts at all, you've probably figured out, that it's not all that bad here where I'm at. However, I'm just about at the 2/3 point of this deployment, and as tends to happen for many people ... I'm ready to go home. Ana keeps sending videos of Jaiden, or cool stuff like 3-D ultra sound pictures of Joey (baby due in May), and I can't help thinking that these are things I should be there for.

Don't get me wrong, I'm definitely not complaining. I'm still deployed with Army guys who have to be away from their families for twice a long as I do. (puts it in perspective) But all-in-all, maybe I'm just getting too old for this stuff. With the High Year of Tenure limiting how much longer I can stay in anyway, maybe I'll just hit up the Transition Assistance Program classes when I get home, and started scouting around for jobs ... the kind where I don't miss Christmas and Birthdays.

Anyway, just a thought. But until then, no more complaining. The military has been good to me over the years. And as far as the "inconveniences" that sometimes go with it, for some reason Super Chicken always pops into my head ... "You knew the job was dangerous when you took it Fred"

hmmm ... I think I need more sleep or something. I just realized, that for today's project365, I took a picture of a rainbow (which doesn't happen often in Iraq), and instead of writing a happy, cheerful blog post to go with it ... I go all Eeyore on you guys.

It's all good though, I'll get over it. And in the mean time, I hope you enjoy the picture (which I only captured because I happened to go outside at Exactly the Right Time ... this was one of those "3 minute" rainbows).

I hope you all make good use of what's left of your weekend ... catch you tomorrow.

p.s. as long as we got started on the "over the rainbow" theme earlier, how about some Bruddah IZ ? ... you know you were already singing it in your head anyway ;-)