Poker Night At The Big Top 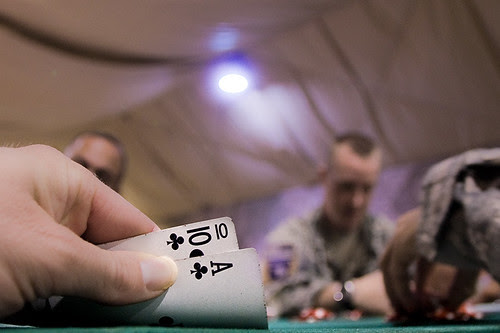 Like many other guys, I became addicted to Texas Hold em poker a few years back. I love to play the game. Fortunately, the rec center over here sponsors a tournament 3 nights a week. We usually get anywhere from 70 to 100 people show up. It's free to enter, but the top three finishers do get prizes ... usually gift cards. I've won my fair share already in the 3 months I've been here so far. But even on nights when I don't win, the real value for me is that it gets me up out of the room. Everywhere we go around base, I'm constantly running into people I know from the poker game. I've even made a few friends that I'll probably keep in touch with even after we get back home.

I started playing Texas hold em after watching a couple of late night re-runs on ESPN2. I played mostly online. Never for a lot of money, but always enough to make it interesting. I am fortunate I guess, that I did a bit of gambling (pool and slot machines) when I was a teenager living in England. I had a good job, and no bills, so it was all in good fun. But one life-long lesson I learned at the time about gambling ...

NEVER, NEVER, NEVER play with money that you can't afford to lose !!!!!

What I really like about poker, is that while it's definitely gambling, there is also a fair amount of skill involved. Even in our little free tournaments, when we get down to the final table or two, most of the faces are usually pretty familiar. My attitude about poker really changed after I read a book, and it dawned on me that to be good at poker, you need to have skill in two areas ... Math, and Psychology. It's a very interesting game to try to master.

And I know that some are just going to say I'm rationalizing, but I do think it can be a valuable use of my time. If you play a lot of poker, you get to practice things like; decision making, risk management, and having patience ... traits that can be invaluable when applied to other non-recreational endeavors.

LOL, and after all that, I'm only back here writing this already because I didn't win tonight. Got knocked out in 9th. Oh well, it was still fun. And besides, the next game is only a couple of days away. ;-)

p.s. the picture above was taken during an actual live hand. I took the shot with the camera basically down on my stomach, while I was looking at the cards, deciding how much to bet.
life lessons picture a day poker rec center texas hold em Todd's World