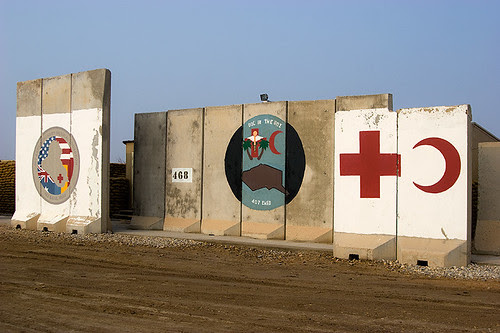 I've enjoyed the benefits of "socialized medicine" for my entire life. First as a military dependent, then on active duty for the past 20 years. Once I retire from the Air Force, I'll continue to have excellent health care benefits; for myself and my family. Because of this, I'd love to be able to say that the current debate over health insurance reform doesn't really affect me. Except that it does ...

It affects us all.

I don't want to get too far off on a rant here. >>Begin Rant<< But suffice it to say, that when it comes to politics, I'm a proud member of the "mushy middle". I've got absolutely no use (or respect) for those members of congress (or the public) on the Right, or the Left who's "principals" (ie: ideology) tend to stand in the way of getting anything productive done. Why is compromise considered a 4-letter word in today's political arena?

I'm not an expert on the health care field. But it seems to me that our congress just spent 3/4 of a year working on plan to at least try to address reforming a system that is so obviously broken. And now, because of one election in Massachusetts, many people seem to be cheering the idea that reform has been "killed".

I have to wonder, if no bill passes; a year or two from now, when the health care crisis has continued to get worse (ie, more and more expensive), will many of these same people then be blaming "the government" for not fixing it?

Speaking of fixing it ...

For my friends on the Left: The health care bill that the Senate already passed, can be voted on by the House of Representatives "as is", and signed into law by the President. (the fact that there's now only 59 votes in the Senate doesn't matter) For those Liberals who oppose the bill because it doesn't go "far enough" (ie, it's too "conservative"); do you really, honestly, think that you're ever going to be able to pass a bill that has "everything" you want, with no concession to the other side? And do you really honestly think that "nothing" is better than "imperfect"?

And on the flip side. To my Conservative friends who are cheering: ... Now what? Do you honestly think that when it comes to our heath care system that the status quo is acceptable? If it turns out that your side does "win" a political victory by blocking the Democrat's proposal, what is the Right's Alternative Plan? ... and before anybody points me to Eric Cantor's website, let me rephrase ... what are the Republicans willing to propose, that has any realistic shot of garnering the support of the 25-30 Democratic Senators it would need to pass? Because let's be honest, any thing less than that is just posturing.

I do have at least one thing in common with many of my more ideological friends ... I'm big time pissed off about the way things are going in this country.

But I'm not mad because the politicians don't always do exactly what I think they should. (it would be scary if they did ... I'm a smart guy, but I'm not always right).

No, I'm pissed off that so many people in our country seem to view politics almost more like a "sporting event", than as a way for society to solve some of the real world problems that we face. Highlighting the differences between those on the Left and those on the Right might make for compelling Cable TV, Talk Radio Shows, and Political Blogs, but it certainly doesn't do much for the prospects of actually addressing some of the very real long-term issues that we (as a country) have already put off for much longer than we should have.

I like this quote: "It is amazing what you can accomplish if you do not care who gets the credit." ~Harry S. Truman

Unfortunately, in today's world it seems that we (as a society) are disproportionately more concerned with who does or doesn't get the credit ... regardless of whether or not the problem is ultimately ever even addressed; let alone solved. Compromise is against the rules. (both sides can't be allowed to "win" at the same time)

p.s. my picture of the day, above, is the wall mural in front of our little clinic here at Ali AB, Iraq.
compromise government health care ideology my opinion politics Todd's World