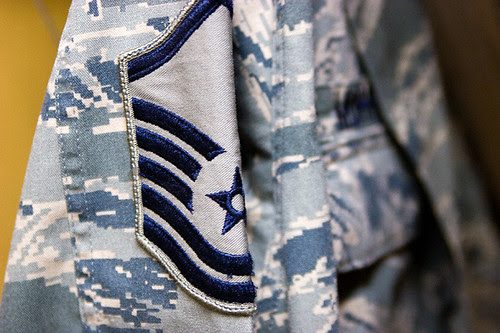 Today's picture is called "Hanging up my Uniform". Apparently, that's what I'll be doing in less than 4 years from now. I just went over 20 years in the Air Force at the end of last month. I'd planned to stay in pretty much as long as I can ... which until recently meant 6 more years. Then this morning I was reading an article in my feed reader from the Air Force times, which said that the AF had announced that High Year of Tenure is being rolled back to pre-2003 levels.

What that means to me, is that as a MSgt (which, in all honesty is the highest rank I'm going to make), I now have to retire when I hit 24 years ... 28 December 2013, in my case. So for the rest of the day today, the thought of hanging up my uniform has been on my mind. Once I get back from this deployment, and take some leave, I'll only have 3 1/2 years left in the military. I had already pretty much planned on the idea that Fort Hood was going to be my last assignment ... this news seals the deal. By the time I've been at Ft Hood for 3 years, I won't have enough retainability to make another move.

Ok, so I know I can't stay in the military forever. What the heck am I going to do? Well, fortunately I've already started on a few things. I recently got up off my butt and started taking some classes. I've also been working on making extra money for several years now. I actually still have the idea in the back of my head that Ana and I's silly little home business will get to the point where it provides enough income, combined with the retirement pay, that we can live comfortably. But just in case I'm being overly optimistic, getting a degree is probably a goal that needs to jump way up on my priority list over the next few years. And in the event that I end up having to use that degree to get another job, some of the connections I've been making with all my old Air Force friends here lately, may turn out to be helpful down the line.

"Tomorrow" comes quicker than you think. Make sure you're ready for it.