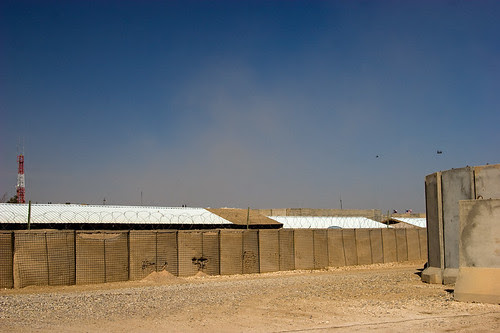 Anybody who's been to Iraq is all too familiar with blowing dust. Any time the wind picks up the dust is usually not too far behind. It blows in on the breeze and then proceeds to get into Everything! Not only that, but (more directly related to my job) it's apparently not too much fun to try to fly in either.

Fortunately, in the winter time we don't have too many bad dust days. Sometimes in the summer though, the visibility will be less than 2 miles for weeks at a time. Today however, was one of the rare winter days where we did get a pretty decent dust storm. We just had a cold front go through, so by mid-morning, the winds were were blowing fairly briskly from the west. We noticed on the satellite image first that it looked like conditions were deteriorating upstream. After a few more frames, there was no doubt; the dust was coming. About an hour later, the leading edge of the dust storm was visible on the horizon. And if you look close at my picture above, you can (almost) see a couple of helicopters racing ahead of the wall to make it back to the base before the visibility dropped too far. They made it.

As far as dust storms go though, this one wasn't terribly impressive. The visibility eventually fell down to under 1 mile ... but it was a gradual descent. That seems to happen a lot in this location. I really haven't seen any dramatic walls of dust this time; where the visibility goes from 10 miles all the way down to 1/4 mile or less in the course of 5-10 minutes.

That wasn't the case during my deployment in 2007 when I was further up to the north. This is one of my favorite pictures from the whole time I was there: 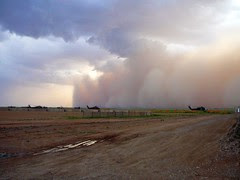 Unlike the dust storm that we had here today, which was caused by strong straight-line winds, the wall of dust above was the result of a collapsing thunderstorm. This phenomena, typically called a Haboob, happens when a high based thunderstorm reaches maturity, and begins to dissipate into very dry air below. As the rain falls, it evaporates, causing the surrounding air to become cooler, and more dense. This cool dense air rapidly descends towards the ground in the form of a downburst. When it reaches the ground, it picks up the dust, and begins to spread out in all directions ... with a dust wall similar to what you see in the picture at the leading edge. These strong outflow boundaries can sometimes travel for hundreds of miles, picking up, and depositing dust along the way.

The really great part is, it's not always real easy to predict exactly when and where a haboob will form. But hey, it makes my job of trying to forecast the weather over here that much more interesting. Right ?

I hope this little basic meteorology lesson didn't bore anybody too much. Who knows, it might even come in handy if you live out west. Next time you see dust on the horizon, you can say "Look it's a Haboob" ... then just smile at the strange looks you're sure to get. ;-)