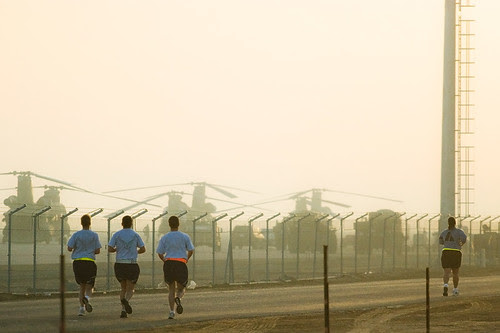 There was a half-marathon at Ali AB this morning. I didn't run in it, because I had to work. Ok, actually even if I hadn't been working, as I told Lt. Puckett when he asked if I wanted to sign up ... if I'm going 13 miles, it'll probably be in a car ... or at the very least on a bicycle. That said, had I somehow mustered up the motivation to go for a nice long jog, I think the group pictured above would have been just about my speed.

Even when we're deployed, we're still expected to get our pt workout in at least 3-5 days a week. It's not really that hard, as there 3 big gyms on the base, miles and miles of roads, and special events such at this half-marathon on a fairly regular basis. In fact, they even mirror some of the bigger events back in the states. For instance, I know that we will be having our own running the Boston Marathon in April ... I'll already be gone, but I believe the LT and Kevin want to run in it, if they're still here. Last time I was deployed here, in 2007, I was with a unit from Hawaii. They had "local" versions of both the Honolulu Marathon, and the Great Aloha Run ... which at 8 1/2 miles is more in my range ... I actually did run in the real thing while I was stationed in Hawaii.

For right now, my preferred workout is still a nice easy 2-3 miles on the treadmill ... listening to some tunes, or checking out a good show on the tv. It's funny, I never liked running on treadmills before (think fear of being one of those guys in the funny videos who flies off the back, might be a factor), but now, I put that little safety clip on, and I'm good to go. Might have to continue running indoors a couple of days a week, even after I get back to Fort Hood in the spring.

Until then, I'll just keep truckin along here.

Hope you have a FuN weekend.