[/caption] A couple of weeks ago, right after I got to Iraq this time, I had to go up to Baghdad for a conference, and change of command. While I was there, we got to play tourist for a couple of hours. A couple of times a week, the Army public affairs conducts tours of some of Saddam Hussien's palaces. We got to see a couple of examples of the aftermath of American Military firepower, during our walks through the "Victory Over America" palace, and the Baath Party House. 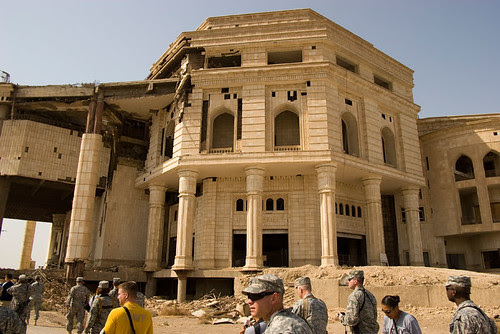 We took buses to the palace, then probably about 200 people made our way up the hill and inside for the tour. All told, we were probably in (what was left of) the palace for about 90 minutes.

I was actually surprised we were even able to walk through the place, as the destruction was pretty impressive: 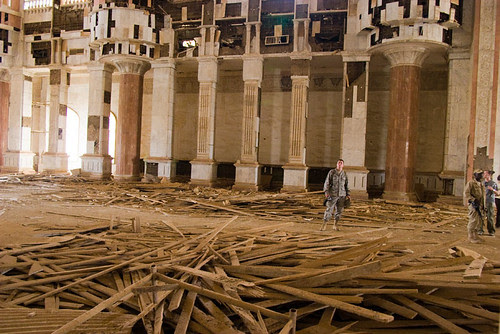 This is the main ballroom of the palace ... or at least what was left of it. 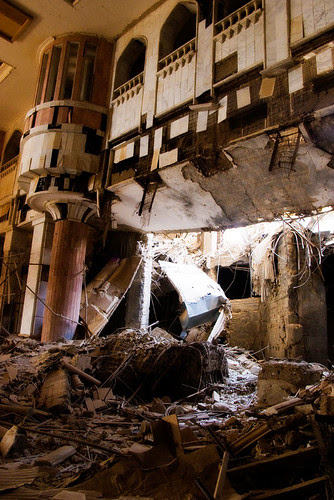 And this is over along a wall, where one of the bombs actually hit.

After walking around for a while trying not to trip over any boards, we were able to stop for a bit of fun taking pictures of ourselves. 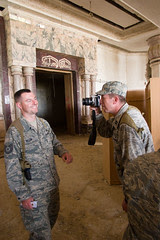 These two guys in the picture to the left are people that I used to work with in Hawaii ... so in addition to seeing some sights, I also had a bit of a reunion in Baghdad.

Then it was finally time to head up the stairs to the roof ... 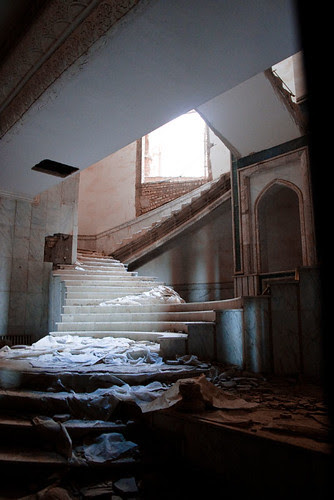 This is one of my favorite pictures from the day.

I took a few more nice pictures from up on the roof. However, I think this post starting to run a bit long, so I'll just plan to do another one tomorrow with pictures from the roof overlooking Baghdad. And possibly even one more the next day for the Baath Party House.

If you like the pictures, be sure to come back again this weekend.

See you then,
Todd

p.s. I also have quite a few pictures from the Ziggeraut of Ur (which is right outside my base). I haven't had the chance to finish the post-processing on all of those yet, so it may be another week or so before I can get those pics up.
baghdad baghdad pictures iraq war scenery People amp; Places Photography Travel Victory over American Palace