When my kids were younger, one of our favorite Friday night activities was to go down to Waikiki beach to watch the Hilton Hawaiian Village fireworks show. We wouldn't actually go to the Hilton though. The military hotel, the Hale Koa, is right next door. And with an ID card, it's totally free to swim in the pool all day long.

Usually what we'd do, is when the kids got home from school, we'd load the car up with towels, swim suits, and maybe a cooler full of drinks. Then we'd get on H-1 and head for Honolulu. It usually took us between 1/2 hour and 45 minutes to get there; depending on how much that wonderful Hawaii traffic decided to cooperate on that particular day. Since, as I mentioned, the Hilton Hawaiian Village is right next to the Hale Koa, parking was never a problem either. We just parked in the military lot, where I think the price was less than a buck an hour ... cheap fun in paradise ;-)

Some times we'd hit the beach for a little bit. That part of Waikiki is really good for kids, as the water is very calm due to a break wall a couple hundred feet out. But most of the time, the kids just wanted to play in the sand any way. As for mom and dad, we were quite happy to just take in the scenery. Then it was time for swimming in the pool. 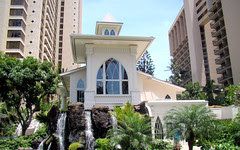 The fireworks usually started at either 7pm in the winter, or 8pm in the summer. Which means we almost always had as at least a couple of hours to swim before the entertainment started. Which wasn't a bad thing at all ... the Hale Koa has a really nice pool. And the best part is, since the fireworks were shot off right over the beach, we often didn't even have to leave the watch to watch the show. I'll tell you, there aren't too many things more pleasant than floating along in a pool, watching an awesome fireworks show on a cool Hawaiian night.

We usually followed the fireworks up with a burger, and if the kids were good, maybe a shave ice.

Memories are good, but I sure do miss living in paradise.