Showing posts from September, 2009
Show all

The IRS Is Not As Scary As You May Think

September 25, 2009
First an admission ... Due to circumstances that were largely NOT beyond my control (even though I'd love to use that excuse), I just recently filed several years of back taxes. I won't go too far into the mucky details; but basically I had one tax year where I either owed a bit, or was due a refund; depending on whether or not someone was legally considered a dependent. The problem was, I was missing a key piece of information that would help make that determination. And that's where my "stupid" started ... Instead of just sucking it up, and paying the high 3 figure amount (really not significant in the big scheme of things) for that tax year, I decided to wait for the documentation, that I expected would allow me to get a refund instead. Then I got even "stupider" ... While waiting (and waiting, and waiting, and waiting) for said documentation, I subsequently ass-u-me (d) that it wouldn't be a good idea to file current year returns, since I sti
Read more

A Dream Board In Your Pocket 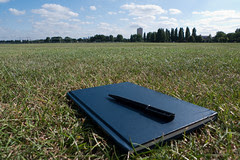 I'm a fan of using a dream board as part of an overall goal setting strategy. In fact, I've previously written about how to make your own online dream board. But what if you don't always have access to your computer? Or what if you're like many of us, and you already spend Too Much Time sitting in front of this silly box? Is there anything wrong with going totally low tech ? Here's an idea ... Next time you're down at Wally World, stop by the stationary section, and pick up one of those little pocket sized notebooks. Not the little tiny flip-up ones. One of the one that opens from the side like a regular notebook, but is small enough to fit in a cargo pocket or purse ... I think it's 4x6. Use it just like you would your online dream board: Put the date at the top of each page. Then divide your daily entries into 3 sections: Today I am Thankful for … Things I like about myself today … My Goals and Intentions … Make a new "post" every mornin
Read more

How To Prepare For A Military Deployment

September 17, 2009
So what are some of the steps that a military guy (or girl) should take when they find out they'll be going on an "overseas adventure"? And I'm not talking about your military training, or the endless checklists and appointments that your unit will surely have for you. I'm thinking more along the lines of how to make sure that your personal stuff ... and your family's, is squared away, so that you don't have to worry about it while you're over there. (depending on your job, you'll probably have enough other stuff to worry about) Ok, let's start with the important stuff ... A Visit to the Legal Office Ok, first area, and I already lied when I said I wouldn't write about things that are on your unit checklist ... I'm sure this is. That said, I do have a few insights to add when it comes to things you need to do at your base/post legal office. Update your Will - If you don't already have a will, you need one. And if you do have on
Read more
More posts