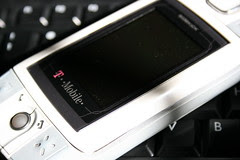 My cell phone died the other day. I plugged it into the charger and left it on the shelf. A couple of hours later, I noticed that it only had one bar, and wasn't recharging. I tried plugging the charger into another wall jack; no dice. Then I tried putting the sidekick on my car charger; still no luck. That phone is D.E.D. dead.

Actually, it's not quite the tragedy that it might sound. The phone itself is about 2 years old. And more importantly, since I'm going to Iraq again next month I was only going to be using the sidekick for a short time anyway (hoping the next version of the "myTouch" will be out by the time I get back next spring).

Anyway, it's obviously not worth fixing the sidekick. And the warranty has long since expired ... although I am technically still eligible to use the warranty since I have (stupidly) been paying for insurance since I've had the phone (I'll do another post soon about what a dumb idea cell phone insurance is ... hint: they don't tell you that the deductible is usually about as much as the phone is worth anyway). This was a possible solution for about 5 minutes, until I discovered that the little pad underneath where the screen flips up is bright pink instead of white. This indicates that my phone has been exposed to water at some point. Which means, the warranty is void.

So, what I ended up with is a cheap phone to get me by for the next week or so.

And with that solution come my Todd's Tip for this post:

If you ever need a cheap phone, to replace either another cheap phone, or an expensive one you can't afford to replace; you DO NOT have to go to the t-mobile store. You don't even have to go to ebay or craigslist (although that is an option). Instead, just head over to BestBuy or Walmart, or any other store that sells t-mobile prepaid cell phones.

These phones cost around 1/2 to 1/3 as much as the exact same phone in the t-mobile store at the "without contract" price. (I was actually given this hint by a very nice guy who works in the t-mobile store in Florida when I was getting a new phone for my son to replace the blackberry he lost last year).

So for the next month, I'll have to get by without internet access on my phone. And when I want to text message, I'll have to use the number pad, instead of the cool little keyboard that I've become an expert thumb typist on over the years. But hey, at least I only paid $29.95, and I didn't extend my contract any more. ;-)