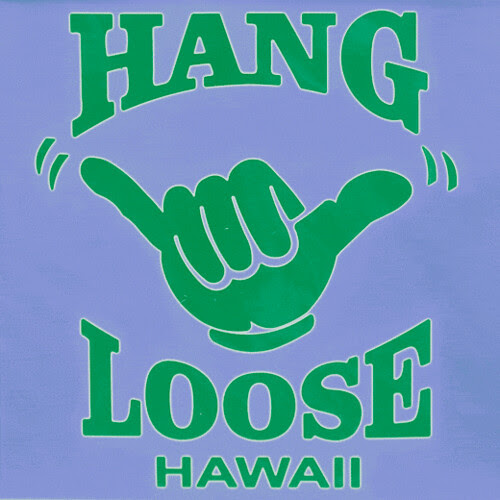 If you've lived in Hawaii for any period of time, you're well familiar with the Shaka sign. Even us Haoles use it on a pretty regular basis. In fact, the last time I moved away from Hawaii (in 2002), I was getting strange looks from the gate guards at Scott AFB for about 3 months ... because every time they waved me through the gate, out of pure habit, I'd have to give them a Shaka.

I did a little research at Wikipedia, and appears that there are several theories as to the Shaka's origin. My favorite is that it represents "Shark Eye" ...

Holding the hand with the pinkie and thumb extended represented the shark head, with the thumb and fingers being the eyes. To say "shaka" (or "shark eye") to someone and flash the "shark eye" hand is said to have been considered a compliment, as the shark is highly respected in Hawaiian culture

One of the most useful places to employ the Shaka sign, is when you're stuck in one of Hawaii's famous traffic jams. This is one of the few places in the world were you can totally cut someone off, and they're not allowed to stay mad at you as long as you immediately turn around, smile, and give them a big Shaka.