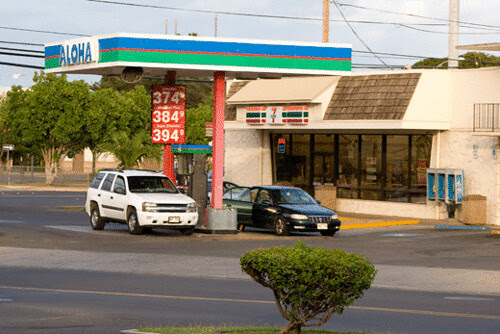 In case you can't guess, my gas needle is nearly on empty, so I'm on my way to fill up today. Along with the pleasures of living in Hawaii, we do also endure the occasional bit of pain ... gas prices definitely falling in that category.

Hawaii consistently has some of the highest gas prices in the country. Which is to be expected, if you think about it. We import our gas, just like pretty much everything else. It's possible to save a little bit of money by getting gas on base (for those with an ID card), or at Costco ... but, honestly it only saves a couple of cents a gallon.  It really is a shame we haven't done a better job developing alternative fuel.

Oh well, just another test of my theory about living here. For everything that I do, or that happens, I simply add the two words "in Hawaii" to the end, then reassess my feelings ...

So, in this case, I suppose that paying almost $4 a gallon for gas In Hawaii is much better than paying that same price somewhere else.
;-)