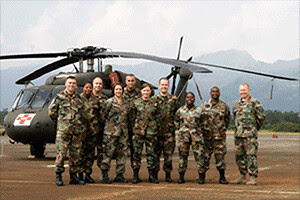 We needed to have a flight picture to celebrate our recent award as the Air Force Weather small unit of the year. This is a pretty big deal actually ... for a unit to win an Air Force level award. Our Major is a good writer, I'm sure that helped ... but, I'm also sure it didn't hurt that we were in Iraq pretty much all of last year. At one point, almost everybody in our unit was either deployed, or returning from deployment. And apparently we did a good job. ;-)

Anyhow, this is the image that will probably end up hanging on our wall. Until then, it will just be the Alohateam Hawaii Picture of the Day.
Air Force Todd's World weather Wheeler