Doesn't Anybody Stop at Crosswalks Anymore? 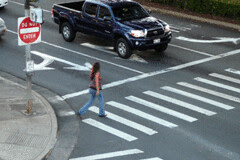 We're barely halfway through the first month of 2008, and there have already been 3 pedestrian fatalities here on the Island of Oahu. Apparently, these accidents are not always the driver's fault. But, with the weather being so good here in Hawaii, we have so many people walking that our pedestrian problems get magnified.

I will tell you one thing I've noticed (both here in Hawaii, and pretty much everywhere else I've lived in the past 10 years or so), Everybody is in Such A Hurry. I know when I was younger, one thing I was taught about driving is that a person in the crosswalk has the right of way ... ie, cars should yield at a crosswalk.

Well, if you've ever tried to cross a street lately, this concept is laughable.

I've had people look right at me, and actually speed up instead of stopping. Even worse than that, when I've been in my car, and stopped at a crosswalk to let pedestrians go, I'm not kidding you, cars have tried to go around me ... in the process almost running over the poor pedestrians I was trying to be nice to.

It sure would be nice if everybody would just learn to slow down. That extra couple of seconds isn't really going to make that much of a difference. Anyway, I'm rambling a bit now. My point is, next time you see somebody on the side of the road waiting to cross, show a bit of aloha and stop let them go.

Maybe if enough of us get back to setting a good example, some of the "old" driving rules will start to catch on again.